President / Board of Directors

Bio: Bob has been a resident of Fort Lauderdale since 1969 when his family relocated from Rochester, New York. He is a graduate of Cardinal Gibbons High School where he was on the honor roll, a member of Key Club and the golf team. He graduated Spring Hill College in 1981 with a degree in the Humanities. Bob joined Suncoast Marketing in 1983 after a year of graduate studies at Nova University. Bob is still an avid golfer and enjoys music and quiet times.

Bob came to Suncoast Marketing in 1983 when the reality of starting a family set in. He was taught how to sell and manage his business by our founder, Dick Blattner. Dick taught Bob how to knock on a door and begin a conversation. In 1983 the conversation revolved around typewriter ribbons, paper products and something called “computer supplies”. Bob recalls 1981, when he graduated college, no one in college had a computer. The digital age was just coming to be. Fortunately, for Bob and Suncoast Marketing, many of the conversations and relationships started in 1983 are still going on today!

In 2001 Dick retired and Bob assumed the presidency of Suncoast Marketing. Suncoast currently employs over 30 people. Many have tenures approaching 20 years. Two employees are his sons Chris and Greg who excel in sales. They joined Suncoast in 2007, and they have been a big part of Suncoast Marketing’s continued success.

Fast forward to today, Bob and his wife, Vicky, are proud grandparents of 5 beautiful grandchildren. Bob continues to work his 60 hours a week and looks forward to his downtime on the weekends.

Quote: “No man is an island, entire of itself; every man is a piece of the continent, a part of the main” 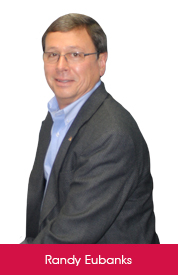 Vice President of Sales / Board of Directors

Bio: In 1995 Randy Eubanks came on board by way of Better Business Forms and Moore Business Forms. He has over 40 years of industry experience in the printed document industry as well as promotional products and other print, imaged, or branded products and services. He has extensive training in various specialty products including: document design, pressure seal equipment and documents, labels, mailers, laser checks, and check security as well as training in Web site design and support, E-commerce solutions for B2B and B2C and employee E-stores. Randy is past President and past Board Member of Gold Coast Promotional Products Association and a previous Board Member of PSDA (Print Solutions Distribution Association), as well as the PSDA’s Member of the Year for 2018. He is involved in all aspects of the Suncoast business with a focus and passion for sales. Randy interacts with clients and prospects daily through personal visits or electronic communications. He travels very frequently for Suncoast to cover local, state, and national accounts as well as to support export business in the Caribbean and Central/South America. Randy provides a reasonable level of sales management and support to the sales team as well as calls with the reps. 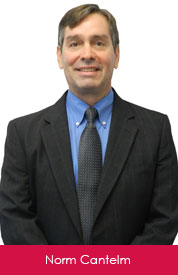 Vice President of Marketing / Board of Directors

Bio: Norman R. Cantelm began his career in 1981, shortly after graduating from the University of South Florida with his Bachelor’s Degree in Finance and Management. He spent the next 17 years with Better Business Forms before leaving in 1998 to join Suncoast Marketing as the Vice President of Marketing and a member of the Board of Directors. Norm oversees the marketing, E-commerce, graphic services, information technology, and printing and promotional products research departments at Suncoast.

Quote: “It takes many good deeds to build a good reputation, and only one bad one to lose it”