The nine-month dispute that clogged cargo traffic in 29 West coast ports has finally come to an end, and through much negotiation, dockworkers and shipping companies have agreed to a tentative deal. Ports are now fully back in operation and those affected by this standoff should no longer face any problems. “The new five-year deal affects 29 ports from San Diego to Seattle that handle roughly 25% of all U.S. international trade . . . Specifics of the contract have not been publicly disclosed. What is known is that negotiators most recently were at odds over the arbitration system used to resolve workplace grievances” (Advantages April 2015).

This agreement will lead to a huge relief of our economy since so many American workers and businesses have been affected by this dispute. Workers have been urged to efficiently take care of tangled backlogs and release all the cargo to its destinations. As the situation grew to worker slowdowns and lockouts, negotiators were brought in to find a resolution before the dispute got even worse. The government is working to ensure that this nightmare issue never happens again. Many industries were affected by congested ports, including specialty ad firms, which caused delays in inventory and customer cancellations. So, though it may take weeks to fully resolve this issue and unload all the backed up cargo, a deal will be finalized and the government will continue to monitor so that nothing this severe ever happens again.

Check out the Advantages Magazine article below! 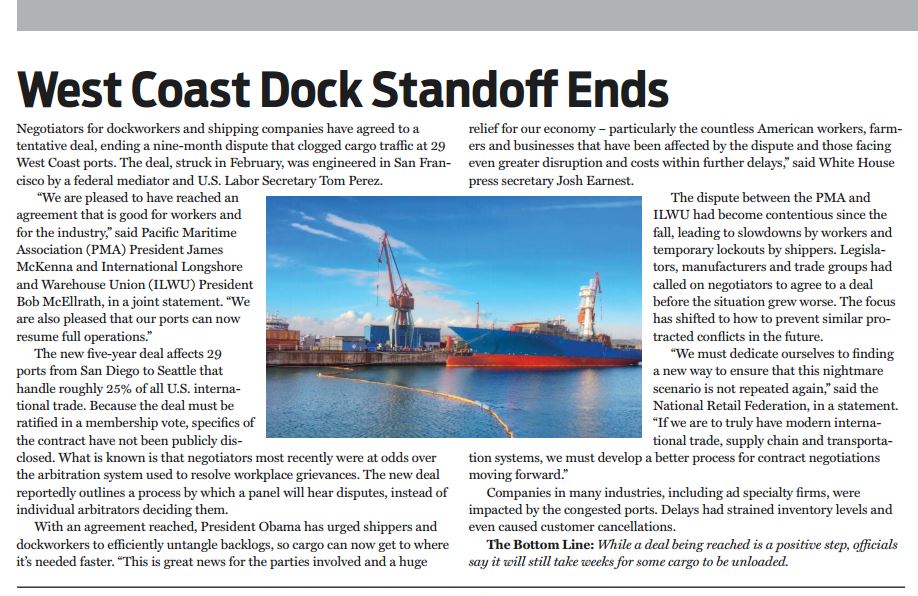 Posted in Euby, News and Events.